Syed Asghar Ali Shah Bukhari is a Spiritual Surgeon from Pakistan who has been curnig the incurable diseases and also doing medical operations and surgeries for the last 500 years by the Power of Allahﷻ the God of Islam. 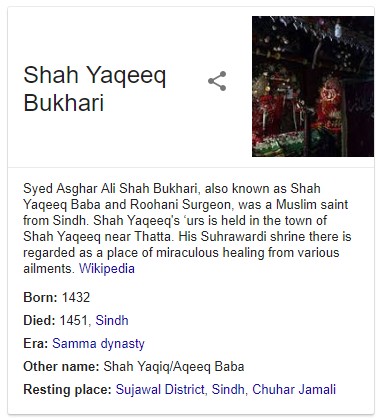 Influencing from Grave in Pakistan

Non-Muslims and Muslims having incurable diseases visit his shrine from all over the Pakistan and outside the country for their treatment.

The treatment is followed by annunciations.

Following the annunciations is considered as important and necessary.

Why do some Muslim scholars say that there are devils on his shrine who treat incurable diseases?

If there are devils who have been doing treatment of incurable diseases on the shrine of Shah Yaqeeq Baba then why such devils are not on other shrines of many Muslim saints and why such devils don't exist on any shrine of any Non-Muslim saint proven by official news channels of the country?

Suppose if there are devils as you say, it has been told by last Prophet Muhammadﷺ that devils run away by reciting of Ayat-al-Kursi.

Why don't those Muslim scholars gather on the shrine of Shah Yaqeeq Baba and recite Ayat-al-Kuri thousands of times to make such devils run away from his shrine if they are truthful?

They will never be able to prevent and stop soul of Muslim saint Shah Yaqeeq Baba from performing medical operations & surgeries of incurable patients (Muslims or Non-Muslims) because he is doing it by the permission of Almighty Allah Wahid Al Qahar - The Creator of universe and God of Nature.

Is this fake, scam or magic?

There is no magician in the world whose soul can do medical operations & surgeries for incurable patients after his/her death.

So, it is absolutely and perfectly 100% reality of the 21st century and indeed also an observable, practical and demonstrateable proof on existence of Allah because there is not even a single soul of any dead non-Muslim in the world who is doing medical operations & surgeries for incurable Muslims and Non-Muslims, so why not?

How do you define fake, scam or magic while several official TV news channels of Pakistan, their news reporters, their journalists, their producers, including newspapers and even BBC reporters are involved in reporting about his results by the mercy of Allah?

And don't forget that Shah Yaqeeq Baba is not an alive human being anymore, he is a Muslim Martyr whose physical dead body is inside his grave and treatment of incurable patients is being done through his soul by the permission of Allah.

Do you know the value of eyewitness and proofs in any court of the world?

If you still consider it 100% fake and you have firm belief that there is no such reality then can you practically go ahead against all news channels and file a case against them in any court of the world?

If yes, then go ahead.
If no, then why you cannot?

Why main stream mass media of Non-Muslim don't tell or spread about Shah Yaqeeq Baba on broad level to inform billions of Non-Muslims of the world if this is 100% true and a reality of the 21st century?

BBC News Urdu has reported about it so do you accept it and want to enter in Islam now?

If yes, then here is guidance about how to enter in Islam and wish you all the best for embracing the truth of Islam by accepting that there is no God except Allah and Prophet Muhammad ﷺ is his last messenger forever.

If no, then why don't you believe and accept report by BBC News Urdu which is a British Broadcasting Company by Non-Muslims and founded by Govt. of United Kingdom?

Now the only question is why it is not wide spreaded in Non-Muslims?

It is because main stream mass media of non-Muslims don't want to reveal this truth of Islam.

Don't you see how main stream media of non-Muslims perform propaganda against Islam?

Why international Muslim scholars are not much talking about Shah Yaqeeq Baba in English language in front of their global audience?

Graves and Shrines is a very controversial topic among Muslim scholars.

Therefore, either those Muslim scholars don't know much about Soul of Shah Yaqeeq Baba or those who know will not consder using him as irrefutable proof because they don't have awareness about importance of Shah Yaqeeq Baba as practical proof on truth of Islam with 100% certainty.

It will be mostly considered as "grave worship" for them so you will see that most of international Muslim scholars will be using scriptures and stories from past, but not this reality of the 21st century.

Therefore, Soul of Shah Yaqeeq Baba is not wide spreaded in English language in the world and majorty of Muslim scholars need to understand the importance of this practical, observable, testable and irrefutable proof on existence of Allah because no soul of any dead non-muslim can do it since they're in painful punishment in their graves for not accepting Islam as their religion after they were invited and preached about Allah in the world through Muslims.

Many truthseekers are looking for a practical sign on truth of a religion in the 21st century of modern science & technology.

Islam has this divine sign from Allah because dead medical doctors, dead surgeons and dead consultants who study medical science cannot perform surgeries & medical operations like Soul of Shah Yaqeeq Baba who's been doing it by the permission and power of Allah.

Satan has captured mindset of many Muslims so they don't see and understand its importance to use in their preaching work, speeches, lectures or articles.

Otherwise, you can see that official news channels, their media teams, news reporters, journalists, etc have already provided enough practical evidences, reports, interviews of eyewitnesses and proofs of real incurable patients who were cured through Soul of Shah Yaqeeq Baba by the power of Allah.

1) Why do you accept news from media and newspapers if they are in your favor but why do you deny authentic news if they are against your own beliefs?

2) If soul does not exist then WHO has been performing treatment, medical operations or surgeries of incurable patients on shrine of Shah Yaqeeq Baba?

3) Can a dead Non-Muslim perform treatement of incurable diseases?

4) Why soul of dead non-Muslim cannot do surgery of patients while soul of a Muslim "Shah Yaqeeq Baba" has been doing surgeries of patients since centuries?

5) How does Soul of Shah Yaqeeq Baba do this all when soul of any dead non-Muslim cannot do it?

6) If Allah is not a real God according to religious leaders and spiritual masters of Non-Muslims, then who gave spiritual powers to a dead Muslim Man?

7) Is there any dead non-Muslim in the world whose soul has been doing treatment, medical operations or surgeries of incurable patients by the power of who non-Muslims worship and claim as gods, and such soul also featured by official media news channels of that country?

8) Why don't soul of any dead non-Muslim have spiritual powers after their death?