Pharaoh Ramses II the Sign of Punishment by Allahﷻ

This is the corpse of the king who claimed to be God thousands of years ago and died after drowning in the sea while refusing to believe in Allahﷻ as the true God in all his life.

Allahﷻ took his dead body out of the sea and presented it to all human beings in the 21st century as a sign for those who can use their common sense, logic, brain & science to enter in Islam by the command of Allahﷻ 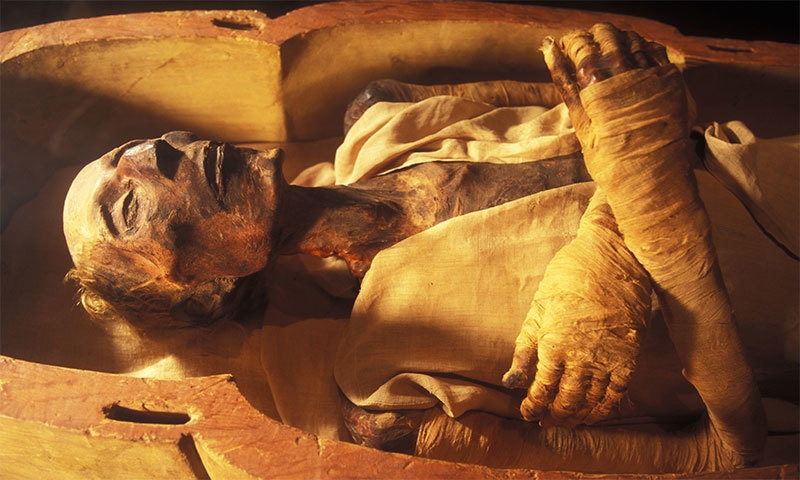 No one knew what happened to Pharaoh's corpse and where his remains were before the 1881, although according to non-Muslim religious books, Pharaoh's entire army was drowned in the sea along with him.

When Dr. Maurice Bucaille examined Pharaoh's body with the permission of the Egyptian rulers, it was discovered that Pharaoh's body had the effects of sea particles, which was proof that he had drowned in the sea, but how did he die? (it was curiosity)

Dr.Maurice and the Pharaoh [Video Documentary]

Then his body was presented to all human beings in the 21st century in the age of modern science and technology as a lesson by the will of Allahﷻ.

So, thousands of years ago, a non-Muslim king drowned in the ocean, and thousands of years later, his dead body, in the 21st century, by the command of the King, Ruler and Creator of Nature and Lord of the Universe, is a warning to all human beings of the world to use their intellect and refrain from denying the existence of Allahﷻ.

How did Prophet Muhammadﷺ, born two thousand years after the death event of pharaoh, told that his dead body will be saved as a sign by Allahﷻ for future generations who will come later?

(It was said to him): "Ah now!- But a little while before, wast thou in rebellion!- and thou didst mischief (and violence)!

This day shall We save you in your body, that you may be a Sign to those who come after you! But verily, many among mankind are neglectful of Our Signs

If Allahﷻ does not exist then who claimed to save Pharaoh's body and who gave this news to Prophet Muhammadﷺ?

When the religious books of non-Muslims do not contain details about what happened after the death of Pharaoh, then who conveyed the knowledge of the future to Prophet Muhammadﷺ that his dead body will be saved as a sign?

How could the body of Pharaoh Ramesses II remain so undamaged compared to the other mummies although his dead body was recovered from the sea?

The Mummy of Pharaoh Ramses II in Egypt

Indeed, Pharaoh was drowned by Allahﷻ in the red sea and the claim to save his dead body was done by Allahﷻ in the Qur'an because only Allahﷻ has full perfect knowledge of the unseen and all future.

So, this is an open and observable miracle of Allahﷻ if non-Muslims can use their common sense and think carefully that Allahﷻ is the one who brought back the dead body of Pharaoh after drowning in the sea by His devised plan after thousands of years in the 21st century.